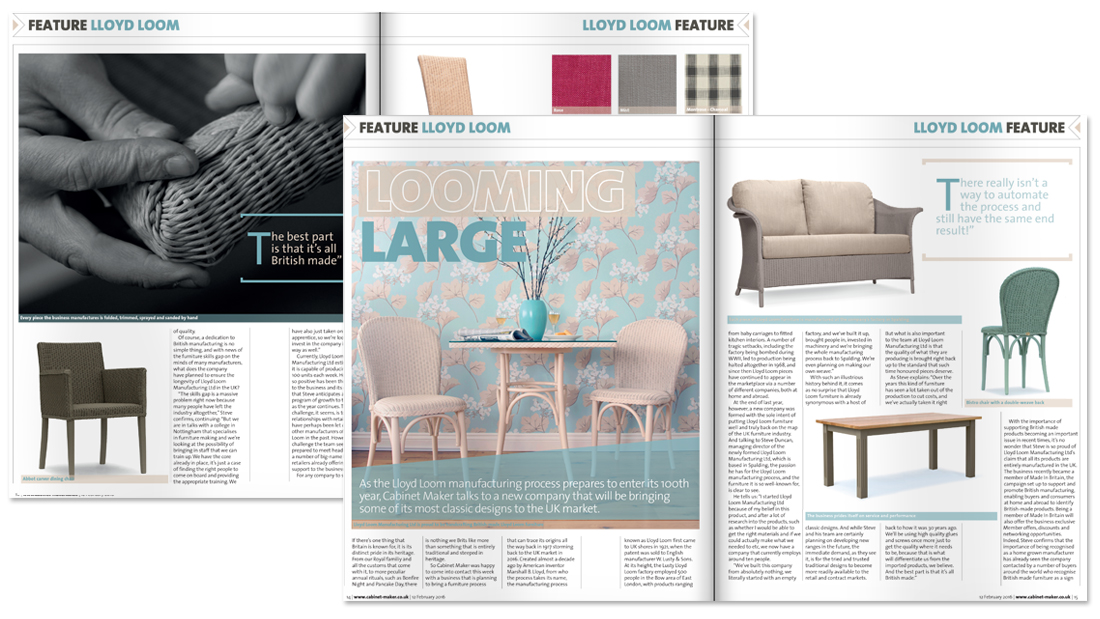 We would like to thank Cabinet Maker magazine for their support, and great feature article about our efforts to produce the worlds finest Lloyd Loom furniture.

Here are some excerpts to enjoy.

” … a new company was formed with the sole intent of putting Lloyd Loom furniture well and truly back on the map of the UK furniture industry.  And talking to Steve Duncan, managing director of Lloyd Loom Manufacturing Ltd, which is based in Spalding, the passion he has for the Lloyd Loom manufacturing process, and the furniture it is so well-known for, is clear to see.

He tells us:“I started Lloyd Loom Manufacturing Ltd because of my belief in this product, and after a lot of research into the products, such as whether I would be able to get the right materials and if we could actually make what we needed to etc, we now have a company that currently employs around ten people. “We’ve built this company from absolutely nothing, we literally started with an empty factory, and we’ve built it up, brought people in, invested in machinery and we’re bringing the whole manufacturing process back to Spalding.”

“…while Steve and his team are certainly planning on developing new ranges in the future, the immediate demand, as they see it, is for the tried and trusted traditional designs to become more readily available to the retail and contract markets. But what is also important to the team at Lloyd Loom Manufacturing Ltd is that the quality of what they are producing is brought right back up to the standard that such time honoured pieces deserve.  As Steve explains: “Over the years this kind of furniture has seen a lot taken out of the production to cut costs, and we’ve actually taken it right back to how it was 30 years ago. We’ll be using high quality glues and screws once more just to get the quality where it needs to be, because that is what will differentiate us from the imported products, we believe. And the best part is that it’s all British made.”

“With the importance of supporting British made products becoming an important issue in recent times, it’s no wonder that Steve is so proud of Lloyd Loom Manufacturing Ltd’s claim that all its products are entirely manufactured in the UK. The business recently became a member of Made In Britain, the campaign set up to support and promote British manufacturing, enabling buyers and consumers at home and abroad to identify British-made products.”
“Steve says: “With us, pretty much everything is done by hand, the weave is cut, upholstered, stapled, and trimmed by hand. I think it would surprise people who have this idea of everything being done by a machine. But every chair we make will be made, folded and trimmed by hand. They will also be sprayed and sanded by hand, because there really isn’t a way to automate the process and still have the same end result! “We offer 12 standard colours, plus any non-standard colour. We’ve got a partnership with the Little Greene Paint Company to use its paints on our furniture. We’re very traditional, and the fabrics we’ve chosen to include on the pieces is also very traditional.”